I’ve been teaching the core prescriptive analytics course in our MBA program since 2005, and it was once again time for a major refresh/improvement. Therefore, this past December I went for it, and then proceeded to ask myself the following question over and over during the first half of the spring semester: “Why did you do this to yourself?” It was grueling. It was hard. It was overwhelming. However, when I look at the end result, I am really proud of it. It’s far from perfect, but I collected tons of feedback from my students (THANK YOU!) and I’m already polishing it for the next iteration (that one will be close to spotless). The goal of this post is to share a portion of the feedback I received, which turned out to contain some unexpected surprises.

To give you some context, I improved the existing homework problems, Excel files, and lecture notes (everything now is in PDFs created with LaTeX; no Powerpoint anymore!). I also created a lot of new content (including a hands-on Lego exercise and a case study I developed from scratch), especially when it comes to decision-making under uncertainty. All in all, I’d say 50% of the course is new material, and the remaining 50% is a much better version of the previous material.

Here are the lecture themes (unless otherwise noted, each lecture is a 2-hour session; there are 2 sessions per week). An asterisk * indicates a brand new lecture:

On my final exam, I had a question asking students to name their favorite and least favorite lecture. I wanted to see where the home run was and where the big fail was. I had a total of 76 students, and here is the final tally: 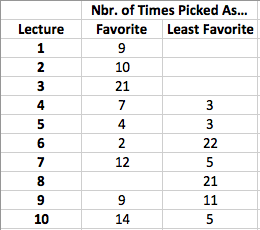 You’ll notice that the columns don’t add up to 76 as they should. Some people provided two favorites, and some people did not indicate a least favorite lecture. Here’s what I infer from the table above. (Let me know if you see something I didn’t!)

I’m pretty happy overall and really enjoyed what I learned from this fave/least fave question. It can be pretty informative. Do you have any other creative ways to elicit student feedback that you find particularly helpful? If so, please share them in the comments below.

Should You Hire Security When Tenting Your House?

Last week I had my house tented because of termites. For those of you who don’t know what “tenting” is (I didn’t until about a year ago), it amounts to wrapping an entire house inside a huge tent and filling the tent with a poisonous gas that kills everything inside (and by everything I really do mean everything). Those who have been through this experience know what a hassle it is. We received a to-do list of pre-tenting tasks, which included:

We had to sleep two nights in a hotel, with two dogs, one of which had just had knee surgery. What an adventure!

The main point of concern was that the house would stay vulnerable (open windows) and unattended during the process. On top of that, one of our neighbors told us that he knew of a house that had been robbed during tenting a couple of months ago. So we started to consider hiring a security guard to sit outside the house for 48 hours. Would that be a good idea? Let’s think about this.

Our insurance’s deductible is $2500. I assume that if thieves are willing to risk their lives (wearing gas masks; oh yeah! they do that!) to enter a tented house, they’d steal more than $2500 worth of stuff. Therefore, being robbed would cost us $2500. This doesn’t take into account that one might have irreplaceable items in the house. However, most of the time those can be taken with you (unless they are too big or inconvenient to carry). In my case, I took the external hard drive to which I back up my data, and the mechanical pencil I’ve owned and used since 1991 (yes, you guessed right, the eraser at the end doesn’t exist any more). The security company we called would charge $15 per hour for an unarmed guard to be outside our house. Multiplying that by 48 hours brings the cost of hiring security to $720.

Let’s say that the likelihood (a.k.a. probability) of being robbed while your house is tented without a security guard is

for the White House is pretty close to 0%), and when a security guard is on duty that likelihood is

, there’s no point in having this entire discussion, so I’ll assume that is true. Here’s a pretty neat rule of thumb that you can use: divide the cost of hiring security by your deductible to get a number

between zero and one (of course, if hiring a guard costs more than your deductible, don’t do it!). Unless the presence of the guard reduces your chance of being robbed (

, you should not hire security! (Later on, I’ll explain where this rule comes from.) For example, in my case 720/2500 is approximately equal to 29%. If the chance of being robbed without security is 30%, unless hiring a guard brings that chance down to 1% or less, it’s better not to do it. If the value of

is less than or equal to 29% to begin with (I live in a reasonably safe neighborhood), the answer is also not to hire security (probabilities cannot be negative). This rule works regardless of the value of

; what matters is how great the improvement to

In addition to looking at the numbers, we also took into account the following clause from the security company’s contract:

…the Agency makes no warranty or guarantee, including any implied warranty of merchantability or fitness, that the service supplied will avert or prevent occurrences or the losses there from which the service is designed to detect or avert.

In other words, if you hire us (the security company) and still get robbed, we have nothing to lose!

So what did we do? We chose not to hire security and, fortunately, our house was not robbed. However, even though the tenting instructions  say that you don’t have to wash your glasses and plates after returning home, we decided to do so anyway (as they say in Brazil: “seguro morreu de velho”).

Disclaimer: The advice contained herein does not guarantee that your house will not be robbed. Use it at your own risk!

Details of the Analysis

So where does that rule of thumb come from? We can look at this problem from the point of view of a decision tree, as pictured below. 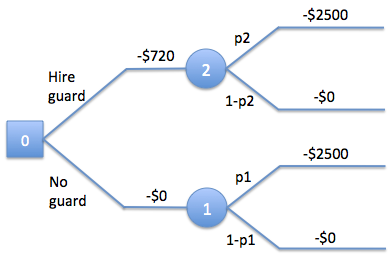 In node 0, we make one of two decisions: hire a security guard (payoff = -$720, i.e. a cost), or not (payoff = -$0). For each of those decisions (branches), we create event nodes (1 and 2) to take into account the possibility of being robbed. At the top branch of the tree (node 2), the house will be robbed with probability

, in which case we incur an additional cost of $2500, and the house will be safe with probability

, in which case we incur no additional expense. Therefore, the expected monetary value of hiring security, which we call

Through a similar analysis of the bottom branch (node 1), we conclude that the expected monetary value of not hiring security, which we call

and to spend $0 with probability

Hiring security will be the best choice when it has greater expected monetary value than not hiring security, that is when

which is the result we talked about earlier (recall that

How Does Analytics Fit In?

. This could be accomplished by looking at police or insurance company records of robberies in your area. It’s not always possible to get a hold of those records, of course, so one might need to get a little creative in estimating those numbers. Having knowledge of the probabilities, the calculation described above could be classified as a prescriptive phase: what’s the course of action? Hire security if (cost of security)/(insurance deductible) <

. There is no predictive phase here because our analysis does not require the knowledge of any future event (only how likely it is to occur). Operations Research can be used in some or all of these phases. Most of what I do in my research and consulting projects lies in the prescriptive phase (optimization). Recently, however, I’ve decided to broaden my horizons and learn more about the other two phases as well, starting with some self-teaching of data mining.